BAC’s Fang Ni is Best in the World 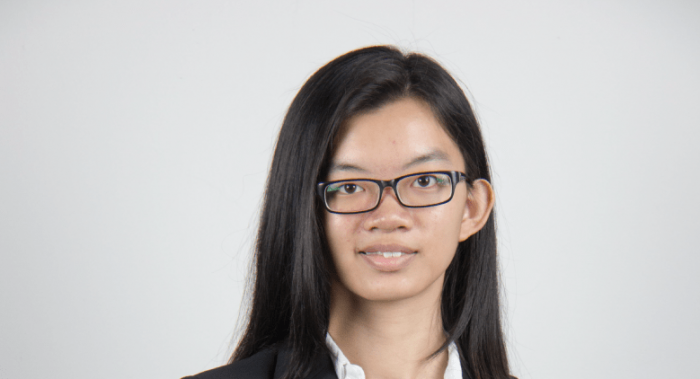 Lim Fang Ni already possesses traits that make a good lawyer, even though as an afterthought the charismatic young woman says she’s not yet certain if the legal practice is her calling after all. That uncertainty may yet change as she has just landed the prestigious King’s College scholarship to complete the remaining two years of her LLB in the UK’s capital. Even more remarkable is her staggering score of 297/400 – the best mark of all Year 1 students anywhere in the world in the University of London LLB exams.

The twenty-year-old Kajang native who completed formal education at the SMJK Yu Hua Kajang, communicates with ease and confidence, displaying good judgment and choice selection of words and a probing, analytical mind. She is, after all, a straight As science stream student whose original options were quite a range – MBBS, Electrical and Electronics Engineering, Psychology or International Business with Psychology.

Ask her why A levels over other pre-university options such as STPM, and why law at that, Fang Ni breaks out in laughter. “Well, it wasn’t planned. After striking out all my initial plans – MBBS is so expensive – I decided to go with an open mind and started exploring. I did my homework, visited various colleges and spoke to friends and the decision to do the A Levels was a pretty easy one. It’s clearly the best recognised, with the widest scope for tertiary education. Also, when I came to attend a talk in BAC based on their reputation and consistency in producing students with amazing results, I was convinced enough to sign up almost instantly after the talk. It just felt right.”

Fang Ni attributes her early success to her balanced upbringing. “My parents are the well-grounded, rational types who did not put too much pressure on my brother and I. My father’s constant reminder though was for us to remain focused on our studies and to just perform to the best of our abilities. It was pretty much the same when it came to what we wanted to do with our further education – there was no pressure to do any one course over the other. In fact, my brother has been trying out a couple fields to find out exactly where his calling is and my parents have no issues with that.”

It would seem like her older brother also played a part in building her resilience. He had tried to scare her off from pursuing the sciences at SPM, telling her how hard the subjects were and that she was going to fail. On the contrary, the warnings only served to strengthen her resolve to prove him wrong. “Yes, you can say I thrive under challenge,” the lanky, bespectacled twenty-year-old laughs again.

Fang Ni applied the same attitude in BAC to excel in her A-levels and subsequently in her first year of the LLB where she achieved her enviable score in one sitting of all four subjects. Lack of English proficiency was one nagging trouble for the young woman who grew up in a Chinese speaking environment in both her home and school. “It really helped that most of my course mates in BAC were Indian and only spoke in English. The hours spent in communication with them, on the pretext of group studies of course, actually ended up helping me improve my English,” Fang Ni says before adding she is also now quite well-versed in Indian culture, customs and food.

Reading law being an arduous task, Fang Ni says she realised quite early on the importance of working very hard on her essays.

“The biggest appeal of being a BAC student in the Brickfields campus is definitely the lecturers. Apart from being thorough professionals, they are also very accessible and hands-on. You can walk into their rooms anytime and engage with them without having to fix an appointment or wait your turn. You can call or text them too in the event you need to clear urgent doubts. For someone like me that needs constant support and assurance in knowing that I’m on the right track, such easy, informal communication with faculty is really essential and BAC provides it very well.”

Now that she has her amazing score and King’s College offer in hand, the elated Fang Ni says packing off to England is like starting a new life. The joy is all the more meaningful for the young woman since she had opted out of doing the UKT (UK Transfer programme) for the UOL (University of London) programme because her parents said they did not have the funds to send her abroad.

“I’m really excited to be going to such a reputable institution. King’s scholarships are given out at their own discretion and I know the competition is intense so I’m really overwhelmed at the moment. My family too, of course. Everyone is proud and happy for me.”

Yet, there was a time when Fang Ni thought she might fail her Criminology and LSM papers owing to what she had assumed to be insufficient content. ‘Insufficient’ by her high standards that is. “Despite trying my best to stick to the forty-five minute per question target I still exceeded for the first two questions and ended up not writing as much as I could have for the other two questions of each subject. I guess it’s quality over quantity-although I did manage to address all the points and also made sure each answer was concluded well.”

“Having said that I would strongly advise all students to stick to the time limit. It is also very important to be consistent with your reading; every day go back and revise your sub-topics. Do not cram!”

Coming from one who’s destined to be a trailblazer in whatever field she chooses it’s certainly sound advice.